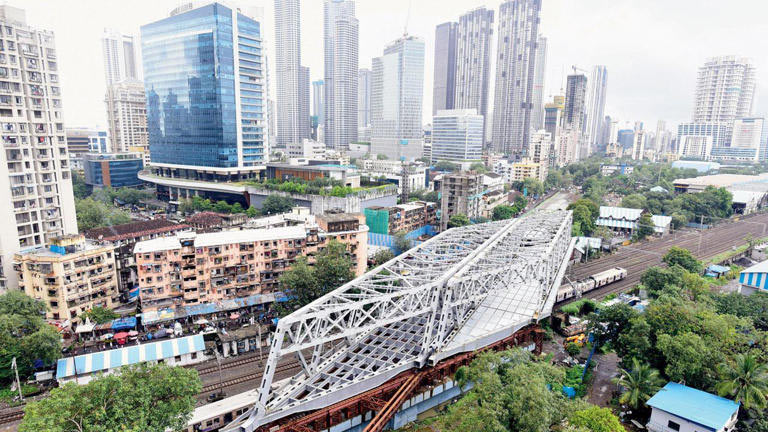 The Western Railway on Sunday completed launching the second and final girder of the Lower Parel bridge, also known as the Delisle Road bridge. WR’s chief public relations officer Sumit Thakur said the work was finished in a record period of less than 3 months. The Delisle Road bridge has been an important link between Lower Parel, Currey Road, Worli Naka in the west and Lalbaug and Byculla in the east.

“This was the longest [90 metre] and weighing about 1045 MT girder with single span 65-degree skew ever launched in Western Railway. Launching of the first girder was completed on June 22, 2022. The launching of the second OWG [open web girder] of Delisle ROB began on September 15, 2022, and was completed during available marginal traffic and power block only, without any major traffic repercussions,” said the senior railway official.

Once the launching is completed, the eastern side approach of the road bridge, which has been retained by the WR, will be handed over to the BMC within 10-15 days. BMC will then take up work on building the approaches to the bridge on this side. The overpass is expected to be ready by April 2023. Authorities said the work was carried out under close monitoring of a team of 15 railway engineers and it involved 8 supervisors and 102 labourers. “This is also a first of its kind for Western Railway,” Thakur said.

The dismantling of the spans over the railway tracks was completed in February 2019. This was followed by the dismantling of abutments in June 2019, after the removal of encroachments by the BMC. WR then awarded the contract for rebuilding the railway portion at a cost of Rs 87 crore and physical work of laying foundations was taken up after the monsoon in November 2019. The foundation work on the east side was completed in May 2020 and completion of the raft foundation on the west side in June 2020 and the east side by January 2021.