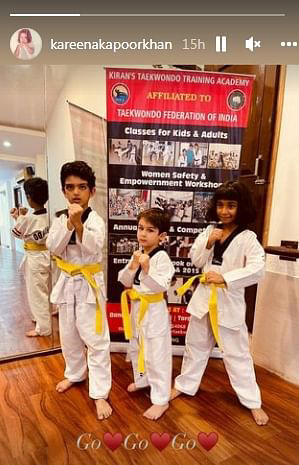 Bollywood’s most adorable star kid Taimur Ali Khan was spotted on Monday with his superstar parents Kareena Kapoor and Saif Ali Khan, outside his Taekwondo class.

The family had arrived for Taimur’s belt changing ceremony. The paparazzi favourite was promoted from a white to yellow belt. Kareena and Saif proudly posed with their son post the ceremony.

Watch the video below.

Besides that, Kareena also shared a picture of Tim from his class and captioned it as, “Go Go Go” with red heart emojis.

Earlier this week, on Mother's Day, Kareena shared the pictures of the length and breadth of her life.

Kareena described her two munchkins Taimur and Jeh as 'length' and 'beadth' of her life She dropped an adorable picture of herself with her kids -- Taimur Ali Khan and Jeh Ali Khan.

In the image, Kareena is seen hugging her two munchkins while enjoying pool time.

"The length and breadth of my life. Happy Mother's Day," she captioned the post.

On the work front, Bebo will be next seen in 'Laal Singh Chaddha' alongside Aamir Khan. The film is the official Bollywood remake of Hollywood classic 'Forrest Gump' starring Tom Hanks.

She also announced her OTT debut in a Sujoy Ghosh directorial with Jaideep Ahlawat and Vijay Varma, which will stream on Netflix.

The untitled murder mystery is based on 2005 Japanese bestseller ‘The Devotion of Suspect X’.

Kareena will also make her debut as a producer with director Hansal Mehta's yet-to-be-titled thriller. She will also act in the film.