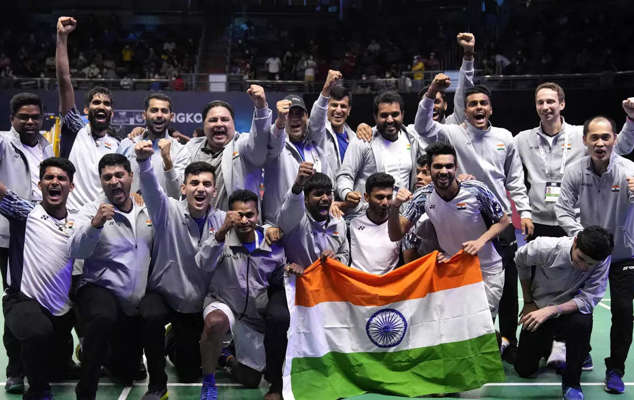 The lack of a foreign coach proved no hindrance as India won the Thomas Cup in Bangkok on Sunday.

The sudden exit of Indonesian coach Agus Santoso seemed to have spurred Kidambi Srikanth and HS Prannoy to perform better. Both were unbeaten in the tournament.

While Lakshya Sen trains in Bangalore with U Vimal Kumar, the other singles players train at the Gopichand Academy. Gopichand groomed Srikanth, Sai Praneeth, Prannoy and others to be world beaters.

But with Gopichand over-burdened, managing the work load of Saina Nehwal, PV Sindhu and about six men’s singles players, an arrangement was made for separate foreign coaches for women, men and the doubles teams with the help of SAI and BAI. The arrangement did not last long, however, as the foreign coaches got lucrative offers from other countries and left.

When Agus left last year, it again fell to Gopichand and Siyadatullah to train the men and the players seemed to have benefited from the experience. Siyadat travelled with the men's singles players and guided them courtside.

Siyadat has been with Gopichand since the academy started in 2006. He was Sindhu’s coach in her formative years as well. Given his experience, the players now look up to him for advice during the matches. “I have been working with them for the last 15 years and have travelled with them. For the last eight months, I’ve completely focused on these players under the guidance of Gopi anna,” Siyadat told TOI from Bangkok.

Even the doubles team of Satwiksairaj Rankireddy and Chirag Shetty have been without a foreign coach since February 2021. Denmark’s Mathias Boe helped them before the Tokyo Olympics and returned a couple of weeks before the Thomas Cup.

All this while, the teams trained with Arun Vishnu and Vijaydeep Singh. “Foreign coaches spent little time here and left whenever they got lucrative offers, citing some family problems. Our coaches work hard but get no credit. Now Mulyo Hondoyo and Kim Tan Her are trying to come back. I don’t think we need foreign coaches as our coaches are good,” said a BAI official.