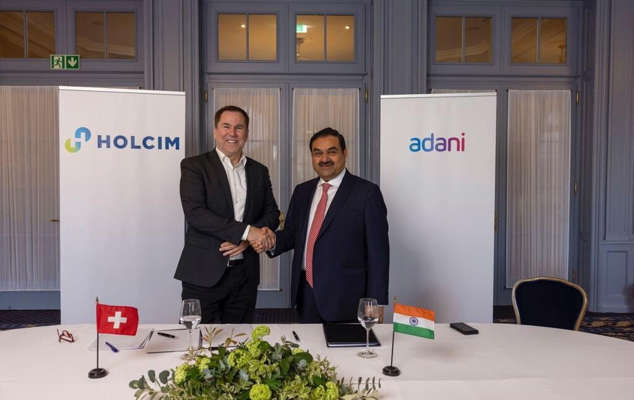 Ambuja Cement shares sprint 10 per cent in early trades on Monday after it was announced that the Adani Group has acquired a controlling stake in Swiss major Holcim’s India business, the Ambuja Cement-ACC combine, for $10.5 billion in a fiercely-battled bidding process that saw participation from large players, including Sajjan Jindal-backed JSW Cement and Aditya Birla Group’s UltraTech Cement.

The value for the Holcim stake and open offer consideration for Ambuja Cements and ACC is $10.5 billion, which makes this the largest ever acquisition by Adani, and India’s largest-ever M&A transaction in the infrastructure and materials space.

Ambuja Cements and ACC currently have a combined installed production capacity of ~70 MTPA. Both Ambuja and ACC will benefit from synergies with the integrated Adani infrastructure platform, especially in the areas of raw material, renewable power and logistics, where Adani Portfolio companies have vast experience and deep expertise.

This will enable higher margins and return on capital employed for the two companies. The companies will also benefit from Adani’s focus on ESG, Circular Economy, and Capital Management Philosophy, Adani Group said.

Gautam Adani, chairman of the Adani Group, said, “Not only is India expected to remain one of the world’s largest demand-driven economies for several decades, but also continues to be the world’s second largest cement market, and yet, has less than half of the global average per capita cement consumption. In statistical comparison, China’s cement consumption is over 7x that of India’s. When these factors are combined with the several adjacencies of our existing businesses that include the Adani Group’s ports and logistics business, energy business, and real estate business, we believe that we will be able to build a uniquely integrated and differentiated business model and set ourselves up for significant capacity expansion.”

Ambuja has a grinding capacity of 31 mtpa and plans to expand it to 40 mtpa in the next two years. About 42 per cent of its grinding capacities are in the north, followed by 28 per cent, 26 per cent and 5 per cent in the west, east and central regions, respectively.

Similarly, ACC has a grinding capacity of 35 mtpa, which is being expanded to 40 mtpa by the first half of 2023. Post-completion of the ongoing expansion, ACC will have 23-27 per cent grinding capacities in the east, south and central regions, and 15 per cent and 10 per cent capacity in the north and western regions, respectively.

“As the deal closes, and ACC and Ambuja Cements become a direct, and most importantly, identifiable individual promoter-controlled entities and Adani emerges as the second-largest player in the Indian cement industry, this deal will potentially change the fortune of the sector for a betterment!,” said analysts at Philllip Capital.