IPL 2022: How LSG's bowling changes ended up helping RR and other bruning questions from double-header 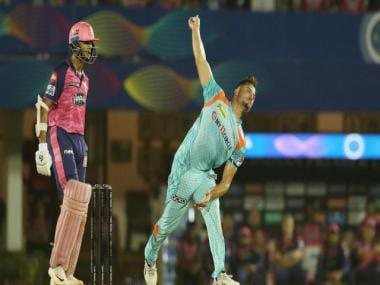 Chennai Super Kings succumbed to another loss as Gujarat Titans thumped them with a strong bowling show, while the night fixture saw Rajasthan Royals leap over Lucknow Super Giants to second in the points table with a fabulous win. With the league stage approaching the end, the second match had a profound influence on the qualification chances of the teams. Here we raise a few burning questions from the doubleheader.

"A bit more runs in the middle overs would have been good," said MS Dhoni at the end of the match. CSK had put up an unimpressive total of 133 on the board, but a lot of it came down to poor intent rather than ability. In the first four overs and the last five overs of the innings, CSK hit zero boundaries.

That is nine overs of a 20-over game going below expectations despite the batting side not losing too many wickets. In the first four overs, CSK ambled along to 15/1, but the last five arguably cost them bigger. In the last five overs, CSK could manage only 24 runs and hit zero boundaries.

From 73/2 at the end of 10 overs, CSK should ideally have put up a total touching or closing in on 160. Instead, they were way short, scoring just 60 runs in the last 10 overs despite losing only three wickets in this period. The shocking lack of intent even in the penultimate over was odd considering that CSK are not even in contention to qualify for the playoffs.

Chennai Super Kings, predominantly a spin-favouring franchise, may have hit upon a different template as a result of the injuries to Deepak Chahar and Adam Milne. Mukesh Choudhary, who replaced Chahar in his role, has had a spectacular season, taking joint-most powerplay wickets — 11 wickets at an average of 22.18 — and could potentially partner Chahar next season.

Against GT, CSK pulled off a wildcard move with Matheesha Pathirana and it worked too with the young Sri Lankan quick, with a Malinga-like action, impressing.

"He is an excellent death bowler," Dhoni told Star Sports. "A bit similar to Malinga. Also what happens with his action, the margin of error for him is quite big. With a slingy action he doesn't get a lot of bounce. Which means even if he commits an error of one yard, it is not like it will hit the middle of the bat. It wouldn't bounce a lot."

Choudhary, Pathirana and Chahar could form a good trio of quicks for CSK next season. Add in an enforcer for middle overs like Adam Milne or the death bowling option of Dwayne Bravo or Dwaine Pretorius and the fast bowling pack is quite varied and skillful while not denting the batting depth or overseas quota too much.

Rajasthan Royals ended their innings with Lucknow Super Giants' three top quicks — Dushmantha Chameera, Avesh Khan and Jason Holder — not completing their quota of overs. While it could be argued that Chameera had an off day (3 overs for 35 runs), Avesh and Holder were two of the best bowlers on show, combining for 32 runs in five overs for two wickets.

Bizarrely, Lucknow who had resisted the temptation before to use part-timers despite having several options failed to do so against RR. Marcus Stoinis bowled the 10th over when LSG had only just dismissed Sanju Samson to reduce RR to 75/2. The Ayush Badoni bowling change was also out of the blue, and although it worked here, not using frontline bowlers against new batters was a miss from Lucknow.

In the end overs again, Mohsin Khan bowled two overs when he has been used as a powerplay specialist before. Avesh Khan bowled the last over while Holder, who has been good in the death overs in the last two seasons, did not bowl at all in the phase. If LSG were experimenting, one wonders if it was the right time to do given that a spot in the top two, if not playoffs itself is at stake.

Why RR should have never benched Yashasvi Jaiswal

Yashasvi Jaiswal has made 68 off 41 and 41 off 29 in two of the three matches since his return to the starting XI. Benched midway through the season after scores of 20, 1 and 4, Jaiswal returned to be a force at the top alongside Jos Buttler, especially with the England wicket-keeper not clicking like earlier in the season.

Jaiswal's upside was always evident — a young, powerplay batter who has good intent against pace and spin and can score all around the wicket. In 2021, he recorded a strike rate of 148.2, scoring at 152 in the middle overs and 146.7 in the powerplay.

Given his age, Jaiswal needed all the backing to continue in a similar role, but with Devdutt Padikkal in the mix, Rajasthan swapped the two back and forth and weighed their options in a few games. Jaiswal, though, has shown that he can complement Buttler and also score at a good rate if the England batter falls early.

Only two bowlers have more wickets than Trent Boult in the first over of an IPL innings — Bhuvneshwar Kumar and Praveen Kumar, with the duo playing quite a few matches more than Boult. Powerplay overs are where Boult thrives. Between 2020 and 2021 in the powerplay, Boult took 18 wickets at an economy rate under seven runs per over.

In 2022, the economy rate is fine at 6.32, but Boult has only taken seven wickets in the phase, two of which came last night against Lucknow Super Giants, impactful blows that pushed RR on top. After taking three wickets in his first four games inside the first six overs, Boult went seven matches for just three wickets in the powerplay, while also conceding more runs than usual. His return to the party with the early strikes helped RR dominate the second innings by pushing Lucknow onto the backfoot early.