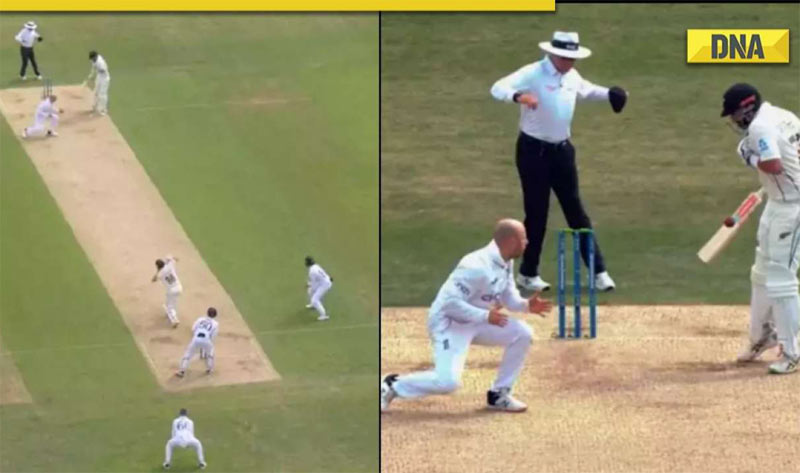 It is not the first time and surely won't be the last time, the game of cricket will see a strange dismissal take place. During the ongoing third and final Test between New Zealand and England at Headingley, something weird happened on Day 1.

Apparently, Kiwi batter Henry Nicholls was dismissed in one of the strangest ways possible and English bowler Jack Leach celebrated the wicket.

Could be called one of the unluckiest dismissals, Nicholls got out after the ball deflected from his own teammate's bat and flew into the fielder's hands. Nicholls had attempted for a straight drive down the park, however, the ball flew towards his teammate Daryl Mitchell who was at the non-striker's end.

Seeing the ball hurling in his direction, Mitchell responded to move away, but the ball struck his bat, and it flew in the direction of Alex Lees who was stationed at mid-off. Soon after, Nicholls was given out and his inning of 19 runs came to an end.

So was this dismissal legal?

Soon after the video went viral, many questioned if the out given was within the rules of the game. The Marylebone Cricket Club (MCC) soon took to Twitter to clarify the rules.

They stated the law with regards to the incident and wrote. "An unfortunate dismissal? Yes. But wholly within the Laws. Law 33.2.2.3 states it will be out if a fielder catches the ball after it has touched the wicket, an umpire, another fielder, a runner or the other batter."

Talking about the clash, Nicholls had 19 runs to his name after facing 99 balls. He was the last Kiwi batter who was sent back to the pavilion on Thursday by the hosts.

After his departure, the in-form duo of all-rounder Daryl Mitchell (78 not out from 159 balls) and wicketkeeper-batter Tom Blundell (unbeaten 45 from 108 balls) made sure to keep the runs ticking on the board as they added 102 runs for the sixth wicket.