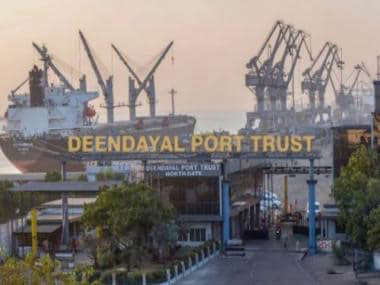 India has sought global bids for a massive expansion project worth nearly Rs 6,000 crore of the Deendayal Port in Kandla, Gujarat, the country’s largest port by volume of cargo handled.

News18 has accessed the global bid documents floated last week that seek Public Private Partnership (PPP) for the mega expansion that involves setting up a new Mega-Container Terminal and a new Multi-purpose Cargo Berth at the Deendayal Port. The terminal is expected to cost about Rs 4,244 crore, while the berth could cost Rs 1,720 crore. This will significantly increase the cargo-handling capacity of the Deendayal Port in Kandla, amidst competition from the privately controlled Mundra Port in Gujarat, which is India’s largest commercial port.

“In view of the expected recovery in the economic growth of the country, steadily growing dry cargo traffic at Kandla and over-utilised dry cargo handling infrastructure at Kandla Port, it is felt that the additional facilities are required,” the bid document mentions. Cargo traffic volumes in India had dipped during the Covid-19 pandemic but have seen a resurgence since 2021. The bid documents say the two new projects would cater to the future growth at Kandla in multipurpose and container cargo traffic.

The Deendayal port primarily services the Northern India hinterland, including the land-locked states of Jammu & Kashmir (now a UT), Uttar Pradesh, Madhya Pradesh and Gujarat. The present capacity of the port of handling dry cargo is 59.96 MMTPA (Million Metric Tons Per Annum) and container cargo of 6 Lakh TEUs (Twenty Foot Equivalent Units) per annum. The new projects are expected to add 18.33 MMTPA capacity of handling dry cargo and 2.19 million TEUs of container traffic. Both the new terminal and berth are targeted to come up within 30 to 36 months of the award of the contract.

The new berth will be used for handling multipurpose cargo like food grains, fertilizers, coal, ores and minerals and steel cargo etc. It will also be designed for handling vessels of up to 6,000 TEUs of containers. Utility corridors, rail road connectivity, rail loading yard and required backup area will also be developed. The Deendayal port in Kandla is spread over 330 hectares.

India, with a coastline of about 7,000 km, has 12 major ports, all of which — except Ennore — are autonomous bodies managed by Board of Trustees appointed by the Government of India. The Port of Kandla was built in 1931 and in 1952, then Prime Minister Pandit Jawaharlal Nehru laid the foundation stone for the new Port on the Western Coast of India in the Gulf of Kutch, as the Karachi Port went to Pakistan. The government describes the Deendayal Port as ‘Port of the New Millennium’.