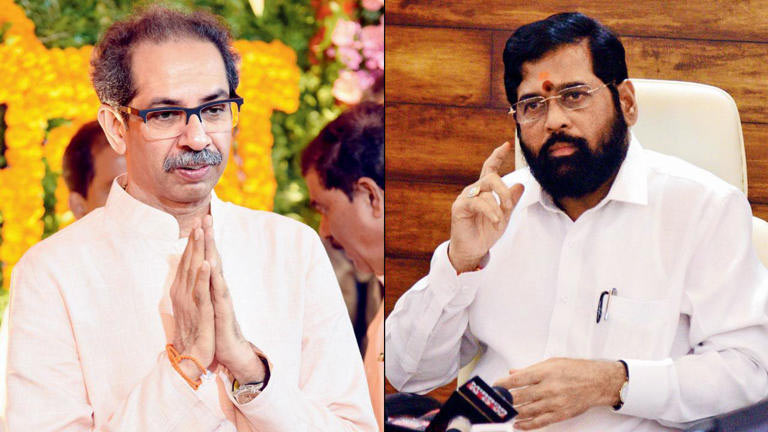 The Supreme Court is scheduled to hear the fresh plea of the Uddhav Thackeray-led faction of Shiv Sena on proceedings before the Election Commission of India about Eknath Shinde group’s claim as the ‘real’ Shiv Sena, today. Sources claim about 85 per cent former corporators from Navi Mumbai, Thane and such smaller civic bodies around Mumbai are now with Shinde.

This is one of the toughest blows that the Shiv Sena has received, and the question remains, will the Uddhav-led Sena rise or bite the dust? The shift of the former corporators is a disturbing indicator as they are crucial to citizen connect, since they are the grassroot workers, regularly in touch with the electorate. Uddhav loyalists are few and have put up a brave face. “Though these former corporators have joined Chief Minister Eknath Shinde’s camp, when the time comes, they will always support us, just wait and watch,” a Uddhav loyalist said.

“Voters have seen the work of Shinde. Shinde has reached every voter. During the pandemic and before it, Shinde helped solve the problems of every citizen whether it was medical, regarding food or other issues. Voters are sensible; they know who stood by them. Whenever there is any crisis in the state, our leader reaches there to help people. If a corporator is supporting Shinde, she/he is aware of what voters want,” said Namrata Bhosle, former corporator of Thane city.

Uddhav loyalists said they will remain with the original Sena. “I started my political career with the Bharatiya Vidyarthi Sena. Our then leaders, former minister Ganesh Naik and MNS chief Raj Thackeray left Shiv Sena but I will always be with Uddhav. He gave me an opportunity to serve citizens. I believe voters are with us,” said Pravin Patil, former corporator of Mira Bhayandar.

While loyalists of both camps insist theirs is the winning group, and harp upon their strength, political experts feel numbers don’t indicate anything. They say it is the voters who will have the final say. “How many corporators have joined which group it not important. It is the elections that will matter. It will depend on how Uddhav Thackeray fights the election. No one can predict that situation based on the number of former corporators with any group,” said political expert Prakash Akolkar.

Political observer Santosh Pradhan has the same view. “After Anand Dighe, Chief Minister Eknath Shinde was the leader of Shiv Sena in Thane. He used to chose the candidates for elections. So the former corporators went with him. However, it is the voter who will decide the course of future politics. The Shiv Sena has been supported by the voters of Thane for long. Even if the corporators go with Shinde, the voters who are the key factor, will decide which way the wind blows,” said Pradhan. Another political observer, Abhay Deshpande is of a similar view. He said, “The voter is at the centre of this politics. Shiv Sena voters and party cadres in Mumbai are still with Uddhav Thackeray. Even MLAs of Mumbai are with him while Thane corporators are with Shinde. But Thackeray’s following is strong. We will have to see what happens in the next few months.”

The Shiv Sena has seen big rebellions in the earlier decades, but those times, it was senior leaders that left the party. This is the first time that a senior leader has walked out with the cadres. It may be recalled that former minister Chhagan Bhujbal was the first rebel whom some MLAs joined. Then, it was former minister Ganesh Naik. After that it was Central minister Narayan Rane who rebelled with 12 MLAs and later Raj Thackeray left the party.