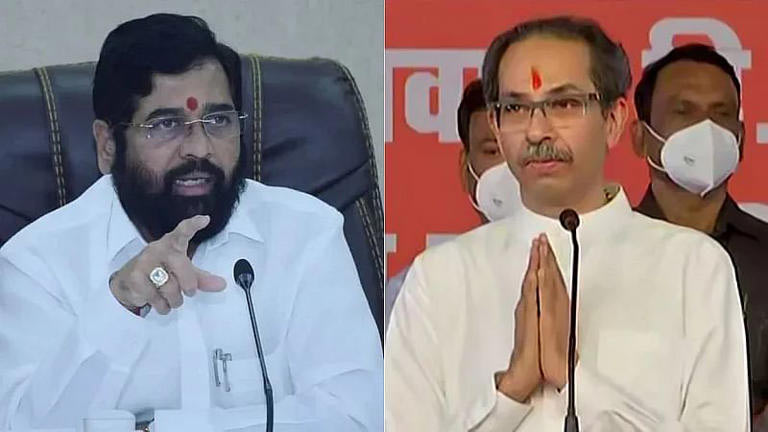 Minutes after Shiv Sena president Uddhav Thackeray’s blistering attack, Maharashtra chief minister Eknath Shinde on Wednesday hit out at his former boss reiterating that the decision to form the Maha Vikas Aghadi (MVA) especially by joining hands with rivals NCP and Congress was a mistake.

Shinde in his address to the leaders from his camp from various states gathered at Delhi, replied to Uddhav’s criticism that he had heard of a gang of child abductors but the gang of father abductors was roaming in Maharashtra. ‘’We are proud, we are taking Balasaheb Thackeray’s thoughts forward. But are you then a gang selling your father's thoughts and party?’’ he asked Uddhav while referring to Shiv Sena’s decision after the 2019 assembly polls to break ties with BJP and form the government with NCP and Congress.

Referring to the pledge letters collected from Shiv Sainiks by Uddhav, especially after the split, Shinde claimed that the Shiv Sainiks were not trusted and therefore, an affidavit was taken from them.

Responding to Uddhav’s claim that he was a CM on contract, Shinde said he had taken the contract to develop Maharashtra. ‘’Yes, I have taken a contract to improve the farmers' condition and develop the state,’’ he noted. Speaking on holding the meeting of the booth coordinators by Uddhav, Shinde asked whether Uddhav remembered them after two and half years that too ahead of the BMC elections.

‘’A treatment meted out to Shiv Sena office bearers and works as a servant will not be tolerated,’’ warned Shinde.

‘’Some asked, will he go with the master or with the servant? This party is not a private limited company. We are working to carry forward the thoughts of Balasaheb Thackeray. If you treat party workers and office bearers as servants, it will not be tolerated. Along with Balasaheb Thackeray, thousands of activists and hundreds of office bearers built Shiv Sena with blood and sweat. He has sacrificed day and night for the party. So you have no right to say that Shiv Sena is our fiefdom,’’ said Shinde.