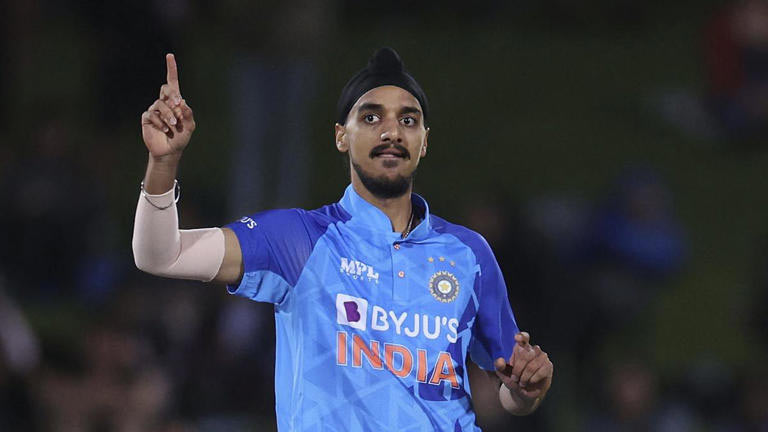 India handed out ODI debuts to pacers Umran Malik and Arshdeep Singh as they took to New Zealand in the first of a 3-match series in Auckland on Friday, November 25. Both the players were handed their ODI caps during a fun-filled team huddle led by captain Shikhar Dhawan.

Arshdeep Singh, who recently shone in India's T20 World Cup campaign and the T20I series in New Zealand, has played 17 List A matches and picked up 21 wickets. After playing T20I for India, Arshdeep is making his ODI debut. Notably, the left-arm pacer made his T20I debut for India earlier in July.

On the other hand, Umran Malik has been handed his ODI debut after having made his T20I foray earlier this year. The express pacer from Jammu and Kashmir has played only 3 List A matches, bowling 25 overs for 2 wickets. He has played 3 T20Is for India. The speedster was part of the T20I squad earlier this week but he warmed the benches.

Arshdeep Singh lit up the team huddle by mimicking Shikhar Dhawan's thigh five celebration. It was the stand-in captain who gave the young left-arm pacer his cap.

Incidentally, India picked only 5 specialist bowlers for the first ODI with Washington Sundar getting a place ahead of all-rounder Deepak Hooda, who impressed in the T20I series.

Meanwhile, Sanju Samson returned to the ODI side after having been benched for the T20I series. India picked both Shreyas Iyer and Suryakumar Yadav in the XI while Rishabh Pant takes over the wicketkeeping duties. As expected, captain Shikhar Dhawan will open alongside Shubman Gill.

New Zealand captain Kane Williamson, who returned to the XI after missing the 3rd T20I, won the toss and opted to field in Auckland.