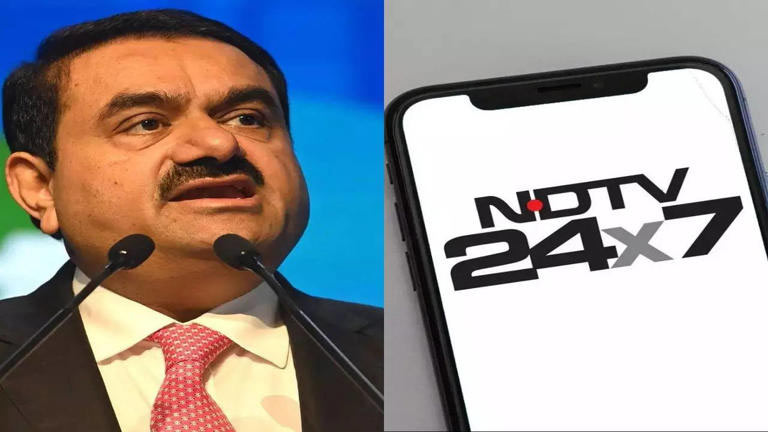 India’s richest billionaire Gautam Adani’s 13-day open offer for acquiring an additional 26 per cent stake in New Delhi Television (NDTV) closed on Monday, December 5, making him the single-largest shareholder in the news broadcaster. Investors tendered nearly 32 per cent share of the media house despite a deep discount to the stock's current trading price.

The Adani Group, which took control over a 29.18 per cent in NDTV through its subsidiary VPCL in August, has got up an additional 8.26 per cent stake in the media company through the open offer. This makes Adani the biggest shareholder in NDTV with a 37.44 per cent stake, followed by the founder-promoters Radhika and Prannoy Roy, who have a 32.26 per cent in the company.

When seen categorically, corporate investors in NDTV have tendered the most 3.93 million shares in the open offer, while retail investors had offered a little over 0.7 million shares and Qualified institutional buyers (QIBs) gave up 0.68 million shares.

The largest shareholder in the company before the Adani Group’s open offer were the Roys who held 61.45 per cent stake. This included the 29.18 per cent held by RRPR Holding, NDTV’s promoter entity, which was acquired by the Adani group indirectly in August.

This takeover had triggered the open offer to buy another 26 per cent stake in NDTV.

Meanwhile, NDTV last week announced the resignation of Roys from the RRPR board but they continued on the news company's board.

How did Adani acquired stake in NDTV?

Adani Group's acquisition of NDTV can be traced back to 2009 when Radhika Roy Prannoy Roy Holdings Private Limited (RRPR) took a Rs 403 crore interest-free loan from a firm linked to Reliance Industries, that eventually ended up with a closely-held firm, Vishvapradhan Commercial Pvt Ltd (VCPL).

This loan allowed VCPL to convert warrants into shares of RRPR Holdings, which held a 29.18 per cent stake in NDTV. The company got acquired by the Adani Group in August which in turn sought conversion of warrants arising from unpaid loans into equity.

While the move was at first contended by NDTV as it said that it was "executed without any input from, conversation with, or consent of" its founders. But late last month the conversion was agreed to and Adani got 29.18 per cent shares of NDTV.

After the Roys resignation from the RRPR board, two of Adani Group’s executives -- Sudipta Bhattacharya and Sanjay Pugalia – were appointed to the RRPR board. It also appointed to the board Senthil Chengalvarayan, a journalist who is an independent director at Quintillion Business Media, in which Adani had acquired a stake earlier this year.

Understanding that the NDTV takeover will give the already diverse Adani conglomerate a footprint in the media space, its chairman Adani last month said that he saw the NDTV purchase as a responsibility rather than a business opportunity.

“Why can’t you support one media house to become independent and have a global footprint?” Adani said in the interview with the Financial Times, adding that he had invited NDTV owner-founder Prannoy Roy to remain as chair.