The King is back! Shah Rukh Khan's fans line up outside theatres to watch Pathaan at 7 am 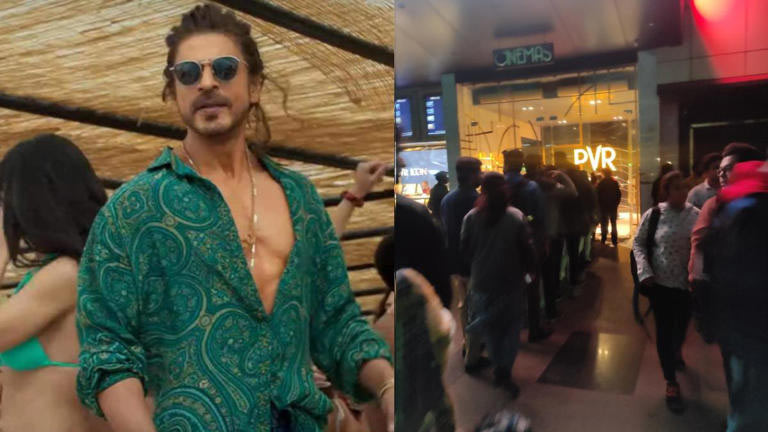 Shah Rukh Khan is a phenomenen indeed! Only a star like him can pull audiences to the theatres for early morning shows of 7 am! As Pathaan dropped in the theatres today, January 25, his fans lined up outside cinema halls to watch the 7 am shows. Some pictures of the same are now doing the rounds on social media.

ANS LINE UP OUTSIDE THEATRES FOR 7 AM SHOWS OF PATHAAN

In a tweet shared by the official Twitter handle, Shah Rukh Khan Universe Fan Club, fans are seen lining up outside the theatres for 7 am shows. The tweet read, "LATEST: People are already lining up at @_PVRCinemas for #Pathaan 7 AM show!!! The excitement is through the roof (sic)!!!"

In another tweet from Oberoi Mall in Mumbai, fans are seen entering the movie hall at 7 am. The tweet read, "7 am show. And its 80% full. Can see family people, aunties, kids. @iamsrk is an emotion. India's most loved star #Pathaan (sic)."

Shah Rukh Khan, Deepika Padukone and John Abraham have come together for the first time in Pathaan. The film is directed by Siddharth Anand and bankrolled by Yash Raj Films. It is the fourth installment in the YRF Spy Universe. The movie is scheduled for release on January 25, 2023, with Republic Day weekend along with dubbed versions in Tamil and Telugu. Shah Rukh Khan will be seen as Pathaan, a RAW field agent, in the film. The music of Pathaan is composed by Vishal–Shekhar and score is composed by Sanchit Balhara and Ankit Balhara.