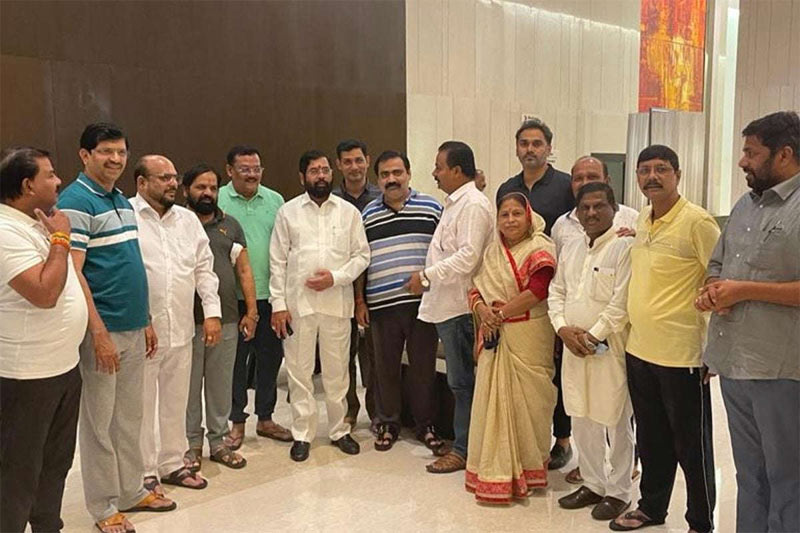 A night after Maharashtra Chief Minister Uddhav Thackeray vacated his official residence ‘Varsha’ a moved into his family home ‘Matoshree’ amid dramatic scenes, Shiv Sena lashed out at rebel MLAs in its editorial ‘Saamna’. Asking them to “wake up on time”, it said that it is now clear who was behind the “excess victory” for someone (BJP) in the recent Rajya Sabha and Maharashtra MLC polls.

“If someone’s dreaming of forming a new government, it is their fault. Sena has weathered many storm. The history of rebellions tells us that those who rebelled were brought down by the Shiv sainiks. The Shiv Sainiks can turn these rebels from current MLAs to ex-MLAs,” it said.

Further, accusing the BJP of “orchestrating” the rebellion, it said that “Use and throw” has been the history of BJP. “The rebel MLAs have been threatened with action by central agencies,” it said.

Last night, hours after reaching out to Shiv Sena dissidents with an emotional appeal and offering to quit, Maharashtra Chief Minister Uddhav Thackeray on Wednesday night vacated his office residence. The CM moved out of ‘Varsha’, his official residence in south Mumbai, and shifted to Matoshri, the private bungalow of the Thackeray family in suburban Bandra, amid high drama even as the Shiv Sena asserted he will not resign in the wake of rebellion by Shinde, a Cabinet member camping with rebel MLAs in Guwahati.

Sena leaders like Neelam Gorhe and Chandrakant Khaire were present at ‘Varsha’ when Thackeray was leaving the official residence. Party workers raised slogans and showered petals on the CM as he left his official house along with his family members at around 9.50 pm.He reached outside Matoshri at around 10.30 pm. However, it took another 40 minutes for the CM to cover a short distance from outside Matoshri to inside his residence.

Shiv Sena’s chief spokesperson Sanjay Raut asserted Thackeray will not resign following the rebellion and maintained the ruling Maha Vikas Aghadi (MVA) will prove its majority in the Assembly if required.Earlier in the day, Thackeray reached out to rebels with an emotional appeal and offered to quit, saying he will be happy if a Shiv Sainik succeeds him.

Breaking his silence over the revolt led by Shinde, the Sena strongman from Thane, Thackeray said he was ready to step down if the rebel leader and MLAs supporting him, all camping in Guwahati in the BJP-ruled Assam, declare that they don’t want him to continue as CM.In an 18-minute live webcast in the evening which was delayed by 30 minutes, Thackeray, who has tested positive for COVID-19, admitted to being inexperienced and clarified that a spine surgery late last year kept him away from meeting people.

The CM said he was ready to give up the post of party president as well if Shiv Sainiks feel he isn’t capable of leading the outfit which is heading the Maha Vikas Aghadi (MVA) government, which also includes the NCP and the Congress.”Why make statements from Surat (where rebels headed first on Monday night) and other places. Come and tell me on my face that I am incompetent to handle the post of Chief Minister and Shiv Sena president. I will resign immediately. I will keep my resignation letter ready and you can come and take it to the Raj Bhavan,” he said.

Recalling the events of November 2019 when the MVA took shape, Thackeray said he agreed to become CM despite his political inexperience after NCP president Sharad Pawar suggested him to take up the job.Thackeray said he was shocked at the ongoing political developments in the state, which started on Monday night when Shinde (58) raised a banner of revolt and landed in a hotel in Surat, around 280km from Mumbai, with a bunch of disgruntled MLAs.

“If my own people do not want me, I don’t want to stick to power. I am ready with my resignation letter even if one rebel comes and tells me face to face that he doesn’t want me as chief minister. I am also ready to quit as Shiv Sena president if Shiv Sainiks tell me so. I face challenges head on and never turn my back on them,’ he said.The CM reiterated his party’s commitment to Hindutva. “Hindutva is Shiv Sena’s breath. I was the first CM to speak about Hindutva in the Legislative Assembly,” Thackeray said.

Showing no signs of backing down from his revolt, which has threatened the existence of the two-and-a-half-year old Thackeray government, the rebel leader said MVA was an “unnatural” alliance and it was imperative for the Shiv Sena to walk out of the coalition for its own sake and that of party workers.The Sena strongman said the MVA, formed in November 2019, was beneficial only to alliance partners the Congress and the NCP, while ordinary Shiv Sainiks have suffered the most in the last two-and-a-half years of the coalition’s existence.

“It is necessary to quit the unnatural alliance for the sake of Shiv Sainiks and the Shiv Sena. It is important to take a decision in the interest of the state,” Shinde, who is camping in Guwahati along with rebel Sena MLAs, tweeted.Shinde maintained that while the NCP and the Congress were growing stronger in the MVA alliance, the Shiv Sena, which heads the governing bloc, and its workers were getting systematically weakened.

Shinde has claimed the support of 46 MLAs, including Independents.He has given a letter to the deputy speaker of the legislative assembly, signed by 35 Sena MLAs, replacing Sunil Prabhu with Bharat Gogavale as the chief whip of the Shiv Sena legislature party.

The urban development minister got a shot in the arm when two more MLAs Yogesh Kadam, minister Gulabrao Patil, independents Chandrakant Patil and Manjula Gavit joined the dissident camp.Congress and NCP leaders held meetings with their legislators and also called on Thackeray to discuss the prevailing situation. Senior Congress leader Kamal Nath spoke to Thackeray over the phone while NCP chief Sharad Pawar met him at ‘Varsha’.