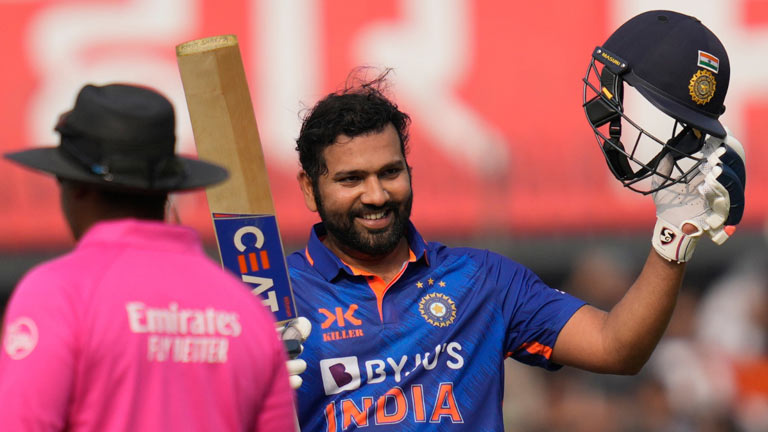 Team India skipper Rohit Sharma finally ended his century drought as he reached the three-figure mark against New Zealand in the third ODI against New Zealand. Rohit's ton laid the foundation for India's 90-run win in the series finale and consequently the 3-0 series sweep, however, the skipper wasn't really happy with the host broadcaster Star Sports showing his century as first in three years. Rohit got visibly irritated with the question at the post-match press conference and slammed the broadcaster for not putting facts into context and for not showing the "right things."

Rohit, who last scored an ODI century in 2020 against Australia, got annoyed when a journalist asked him about the three-year gap between his 29th and 30th tons in the 50-over format. After replying to the question on Jasprit Bumrah and tracking his progress, Rohit said, "Regarding the first hundred in three years, I’ve played only 12 ODIs in three years, so three years sounds a lot..”

Since the century in 2020, Rohit played just 11 ODIs in two years in 2021 (three) and 2022 (eight) combined before the six matches in 2023. Rohit got starts in all five games against Sri Lanka and New Zealand but didn't get a big score. However, he eventually reached the mark.

The captain wasn't done yet. Addressing another question if the innings was the 'big comeback' for Rohit Sharma, the 35-year-old snapped at the journalist and said, "What sort of a comeback? I didn’t get it. Oh, someone must’ve told you! See, of those last three years, for eight months (in 2020), everyone was home. Where were the matches? Last year, we played only T20 cricket. In T20 cricket these days, no one is batting better than Suryakumar Yadav. He has scored 2 hundreds (in T20Is), and I don’t think anyone else has scored a century. Regarding Tests, I’ve played just 2 matches, against Sri Lanka (last year), while I was injured in between. So, you see all this before making your news."

Rohit's century, followed by his opening partner Shubman Gill's hundred and cameos from Virat Kohli, Hardik Pandya and Shardul Thakur helped India get to a strong score of 385 runs, which in the end proved to be enough for the Men in Blue to win the Indore ODI.