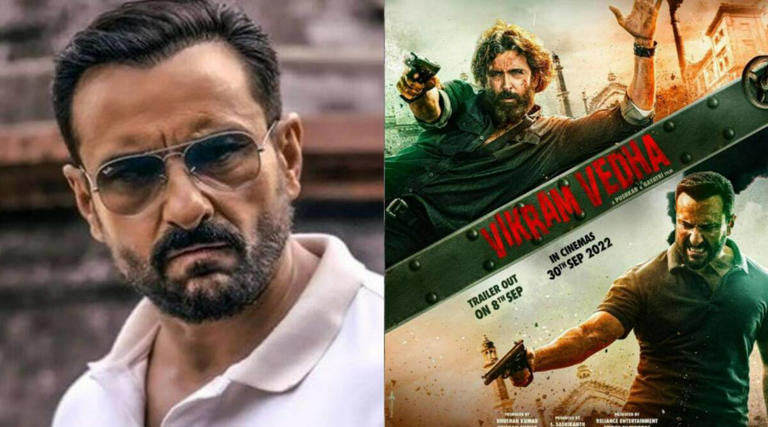 Saif Ali Khan minces no words. The actor, who was last seen on the big screen in Vikram Vedha co-starring Hrithik Roshan, says the action thriller was a disappointment at the box office despite being mounted well with an able star cast.

Hindi remake of the 2017 Tamil hit of the same name, Vikram Vedha was directed by filmmaker-duo Pushkar-Gayatri, who also helmed the original. The film opened to rave reviews but had a lackluster run at the box office.

In an interview with CNBC-TV18, when asked why Hindi films are not clicking with the audience, Saif said he, just like everybody else, is clueless.

"Honestly, Vikram Vedha was disappointing at the box office, in the sense that it opened and ran and everyone who saw really liked it, but philosophically looking back, the reason we should be polite to each other is because nobody has any clue what works, what doesn't or what's going to happen," the actor said.

The original film starred R Madhavan and Vijay Sethupathi. The Hindi remake had Saif reprising Madhavan’s role, while Hrithik stepped into Vijay’s shoes. When the film released in September, after a dull marketing campaign and riding on the heavy shoulders of Hrithik's first screen outing since his 2019 blockbuster War, Vikram Vedha struggled to cross Rs 80 crore in India.

Saif said it was expected that the film will do well, but that didn't happen. The trend of films not working, the actor said, has already led to introspection.

"It was certain that this film, with these two guys in it, is going to open big and since it's so well made, it's going to run. But it was disappointing. I have no idea what's happening. People will continue to make movies, we will continue to try, prices will keep fluctuating, because our pricing is insane-- we pay people astronomically and the returns have been not good," he added.

Vikram Vedha's failure at the box office has come in a year where few Hindi films have truly performed, while South films like RRR, KGF 2 and Kantara have broken box office records.

Acknowledging the current trend, Saif said the Hindi film industry may have gone away from the roots of Indian cinema, which RRR and KGF are firmly rooted in.

"South films are doing enormous numbers, there are classes going on about what's happening. May be sometimes in Bombay we have a tendency to wander off the path towards European cinema or lose touch with... I remember a lot of the films I had done a few years ago, people had stopped wanting to shoot songs. There are a lot of directors still who are uncomfortable about that.

"It is part of our culture. Films like RRR, KGF 1 nailed it, I love those movies. I loved KGF 1 particularly, it had that universal thing to it. There are certain movies that have those things and it doesn't matter if it is garish, loud and crazy. It is very confident cinema," he signed off.